Dallas Park and Recreation Department has been participating with NFL Flag Football program since 2017.  NFL Flag Football program is a safer alternative for parents who might hesitate to let their children participate tackle football. NFL Flag, powered by USA Football is geared toward kids who want to learn how to play flag football, tactics, and most importantly - HAVE FUN! Football players should anticipate a challenging but instructional program that focuses on fundamentals, lessons in teamwork and sportsmanship. 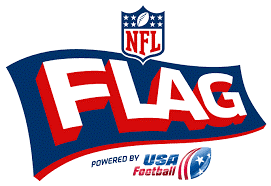 Tournament: Area tournament will be open to the outside NFL flag leagues and DISD schools that participated in the NFL Flag program. November 21st and 22nd - Tournament Location TBA

NFL Regional tournament will be hosted by the Houston Texans in December.